The beginning of my love of dining in France, particularly in the provinces, roughly coincides with the birth of the annual Guide Gault-Millau in 1972.

The passing of Christian Millau this August 4th is the definitive end of an era, even though he was in retirement for several years and had sold his publishing company in 1989. (His founding partner Henri Gault left the publishing company and the Guide bearing his name in 1986). Unlike the staid, conservative Guide Michelin, which took its time awarding three stars and never provided any descriptions or narratives, Gault and Millau were doctrinaire, if not edgy and outspoken, and were relentless promulgators of what they called “La Nouvelle Cuisine Française”. In their monthly magazine devoted to chefs, restaurants, recipes, products and tourist destinations, they were not shy about promoting the chefs and restaurants that were emblematic of this lighter approach to making dishes that was firmly rooted in French techniques. Yet, they were receptive to Asian influences, which, if memory serves me right, began to appear in dishes after a trip to Asia in the early 1980s that included Pierre Troisgros and Louis Outhier.

The guide assigned points on a scale of 1-20 (no restaurant ever received a score less than 10) and zero to four toques; red toques if the restaurant conformed to the criteria of La Nouvelle Cuisine, or black if they were classical or traditional. Sooner or later, the restaurants they awarded 19/20 became Michelin three-stars, but almost always after a considerable passing of time. Therefore, if you followed the Guide Gault-Millau, you would be aware of chefs and restaurants that for the most part would eventually be given three stars by Michelin. Furthermore, Gault and Millau’s coverage and knowledge of every aspect and every detail of gastronomic France made their guidebook the best resource for visiting all manner of restaurant, be it one-dish specialty ones for cassoulets, choucroute, bouillabaisse, etc. and, which I particular liked, cuisine des femmes.

What I came to realize is that the Guide Gault-Millau unwittingly documented, beginning in the mid-1980s, the evolution of ambitious provincial gastronomic travel from primarily a North-South axis (from the Côte St. Jacques in Joigny to Paul Bocuse outside of Lyon, or to push a little westward, Les Frères Troisgros in Roanne) to an East-West one starting in Crissier, outside of Lausanne, at Restaurant Girardet, to Marc Veyrat in Annecy-le-Vieux to Régis Marcon’s Auberge des Cîmes in Saint-Bonnet-le-Froid in the Ardêche, Pierre Gagnaire in St. Étienne to Michel Bras in Laguiole in the Auvergne. One could argue that since these restaurants were pulling out all the stops to gain the coveted third Michelin star, these young chefs were also at the peak of their creativity and putting out theit maximum effort.

Overlooked in all the obituaries and testimonials is for me (and perhaps almost no one else) Gault and Millau’s most memorable achievement—the creation of the monumental “Guide Gourmand de la France”, published by Hachette in 1970.

The work was one in a series of books in the old  Guide Bleu format, each of which was devoted uniquely to art, literature, religion or the history of Paris streets. As such they were conceived to be used geographically, or wherever one was either walking on a city street or driving in or towards a town or village. In the case of “Guide Gourmand de la France”, no matter where you were in Paris

or anywhere in the rest of France,

the guide would inform you of the gastronomic attributes at hand or nearby, be they extant or historic: i.e. restaurants; cafés; shops; produce; and local specialties such as a savory dish, baked good; or a sweet. The same can be said for culinary personnages; songs; books; historic events; festivals; and on and on. The guide has 1112 pages with 128 itineraries;

restaurant listings both by specialities and names and addresses in Paris and the provinces; a short bibliography; an index of Paris streets and every place in France written about in the guide; an index of culinarily-significant people; and another of dishes, products or produce; and whatever there was to drink throughout the country, as well as several maps of France 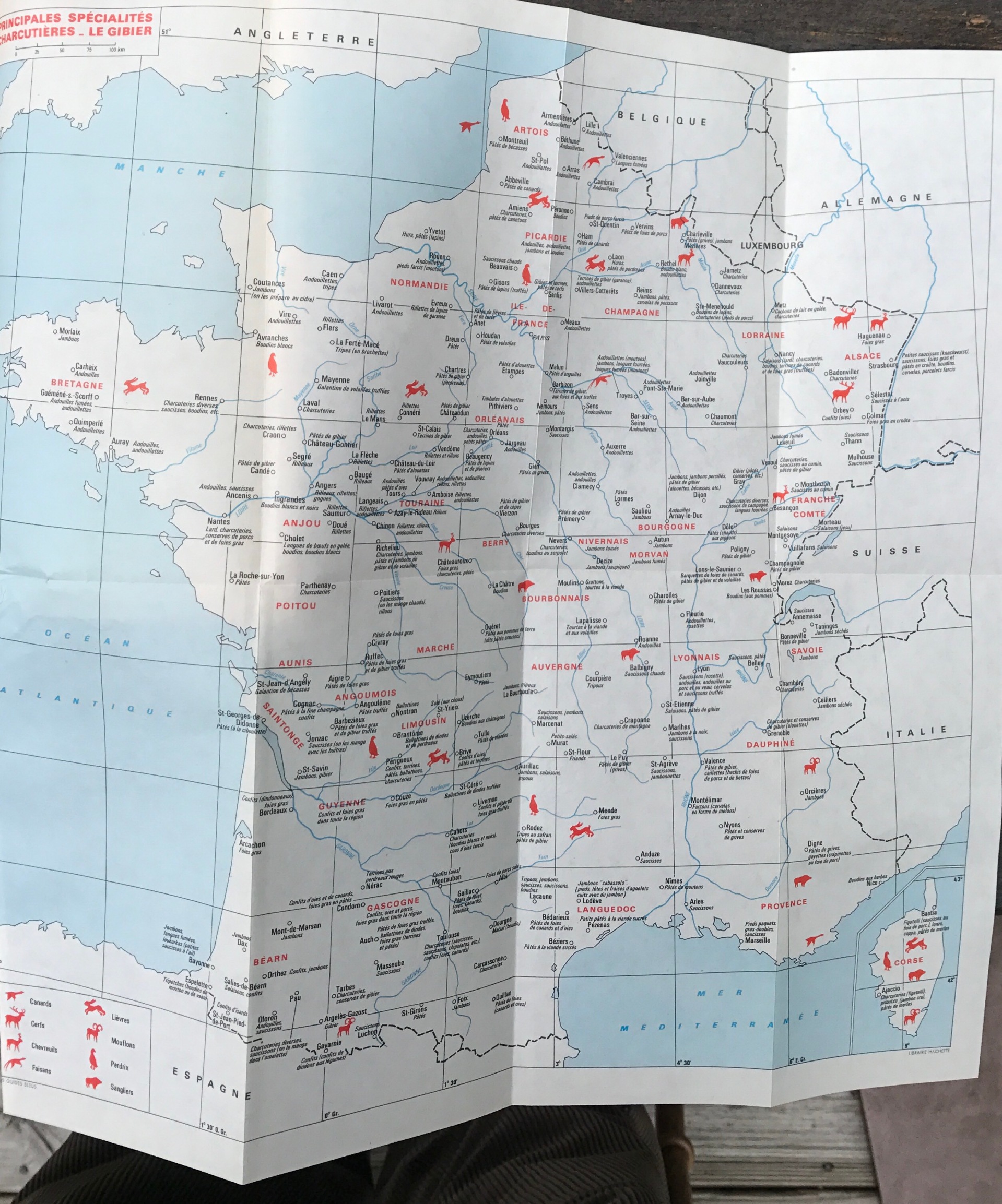 that pinpointed the production of cheese, wine and produce of the nation. The research and the labor were extraordinary, which certainly were one of the reasons why the guide was never updated to appear in subsequent years. Still, for any gastronomic scholar, serious gourmand or Francophile, the book is an essential marvel and a touchstone for anyone who wants to recognize the changes in France’s gastronomic landscape since this book appeared.

Christian Millau may be the last great chronicler of restaurant life. Not that his writings were always the equal of M.F.K Fisher or Calvin Trillin, but that they documented what looks to be the last époque in the history of restaurant dining that was rooted in gastronomy as opposed to economic/investment factors, the integration of gastronomy deeply into mass media and popular culture; the glorification of mediocrity; the diminishing of diners’ choice and autonomy; and the dilution of technical prowess. Although he was not above acting as a source of publicity and sponsoring activities such as gastronomic Mediterranean cruises and special dinners, Christian Millau never wrote about or engaged himself in those activities that lacked integrity or that compromised him. One of these that Americans were able to see in 1986 was the 13-part series on PBS “Dining In France” narrated by Pierre Salinger.

In his last 15 years or so, Christian Millau must have been disheartened, if it distraught, about the changes in gastronomy and restaurant-going. Still, the profound influence of La Nouvelle Cuisine Française, though diminished, still plays a role through the search for, and use of, the best and freshest ingredients along with shorter cooking times and the lightening of sauces.

(I have asked the Paris-based gastronomic writer Jörg Zipprick, some of whose other writing you can see close-by, to share his sentiments about the Guide Gault-Millau, as he and I were faithfully following it in the 1980s and much of the 1990s).

The first Gault-Millau Guides, still called “Guide Juillard”, and the magazine issues from the 70s and the 80s have the wittiest text I’ve ever read about gastronomy. The main difference with other guides of these times was that reasons for the judgement of Gault and Millau were outlined in a text. This has been done before (for example in “The Gourmet’s Guide to Europe”) but that was long ago. The Guide Gault-Millau was able to mock the arrogance of chefs and clearly didn’t see them as gods dressed in white.

Under Gault and Millau’s reign, the guide was extremely well-written and could have endangered the supremacy of Michelin were it not for the tire maufacturer’s marketing power. Gault and Millau’s magazine issues devoted to Switzerland, Germany (written by my mentor Manfred Kohnke) and Austria followed in these footsteps. These were guides that you bought for the pleasure of reading.

The guide wasn’t perfect: the ten commandments of nouvelle cuisine were utter nonsense, especially “tu seras inventif”. Nobody, not even artists, actors, writers is “inventive” every day. The message that something has to be new to be good is very much responsible for the current culinary mess. Sure, there was a naïve belief in the future in the 1960s and 1970s, but other than some cooking people, Gault and Millau knew how to put it all in perspective, something that cannot always be said for today’s guidebooks and their writers.

Advocate for the restaurant patron.