If you’re gourmand enough, the food gods will smile upon you and leadeth you into temptation of any restaurant you wish to enter, which often means the ones you think you may never be able to enter. Most notable among these in the not-too-distant past are Jamin–later to become Restaurant Robuchon– in the late 1980s and early 1990s (Those old enough may remember the Parisian restaurants’ boycotting of Americans at the time); Restaurant Girardet outside of Lausanne, especially after Morley Safer did a segment for“60 Minutes” about it more than 30 years ago; and more recently elBulli, Can Roca. Noma, Osteria Francescana and Alinea.

Japan has more than its share of difficult-to-book restaurants, particularly some of the sushi and kaiseki ones in Tokyo. In planning my recent trip to Japan, a provincial restaurant named Yanagiya caught my eye because of its sky-high score on Tabelog, the Japanese restaurant-goer’s rating site. That it also was the only one of its breed–an irori restaurant, an old, traditional but dying class of grilling-over-charcoal cuisine– among the elite Tabelog restaurants really stirred my juices because it was also deep in the countryside– in Gifu Prefecture, about 200 miles west of Tokyo and 40 miles northeast of Nagoya–and I adore rustic restaurants in places I have never been to or otherwise wouldn’t visit. But how to cop four places at Yanagiya, which is one of those “You had to have been here already” or “You need to come with someone who already has” restaurants? I put a fearless, confident spouse of a long-time Japanese friend who never takes no for an answer in charge of trying to get us this coveted reservation. Through a stroke of fortuitous timing, she reached Masashi Yamada, the fourth generation family member since the restaurant’s founding in 1946, on Yanagiya’s published phone number, one that he almost never answers. He told her that since he happened to pick up the phone, then it must have been a stroke of fate by which he felt a compulsion to reserve for her one of his eight irori rooms.

After two hours and forty minutes on three trains starting out at Tokyo Station, we arrived at Mizunami Station where we and about 20 others squeezed into Yanagiya’s mini-bus for the 20-minute drive through “ Le Japon Profond” of streams, dense woods on hilly terrain, and metal-clad small buildings for undisclosed enterprises. Dutifully we and the rest of the diners waited outside the restaurant for ten minutes or so until management let us in past a display by the front door of five used bottles from the Domaine de la Romanée-Conti.

.A young woman took the four of us into our private, palindromic irori room that was two stories high and decorated above with two ayu or sweetfish wood sculptures. Running nearly the height of the room was an adjustable  jizaikagi for hanging  cooking pots. 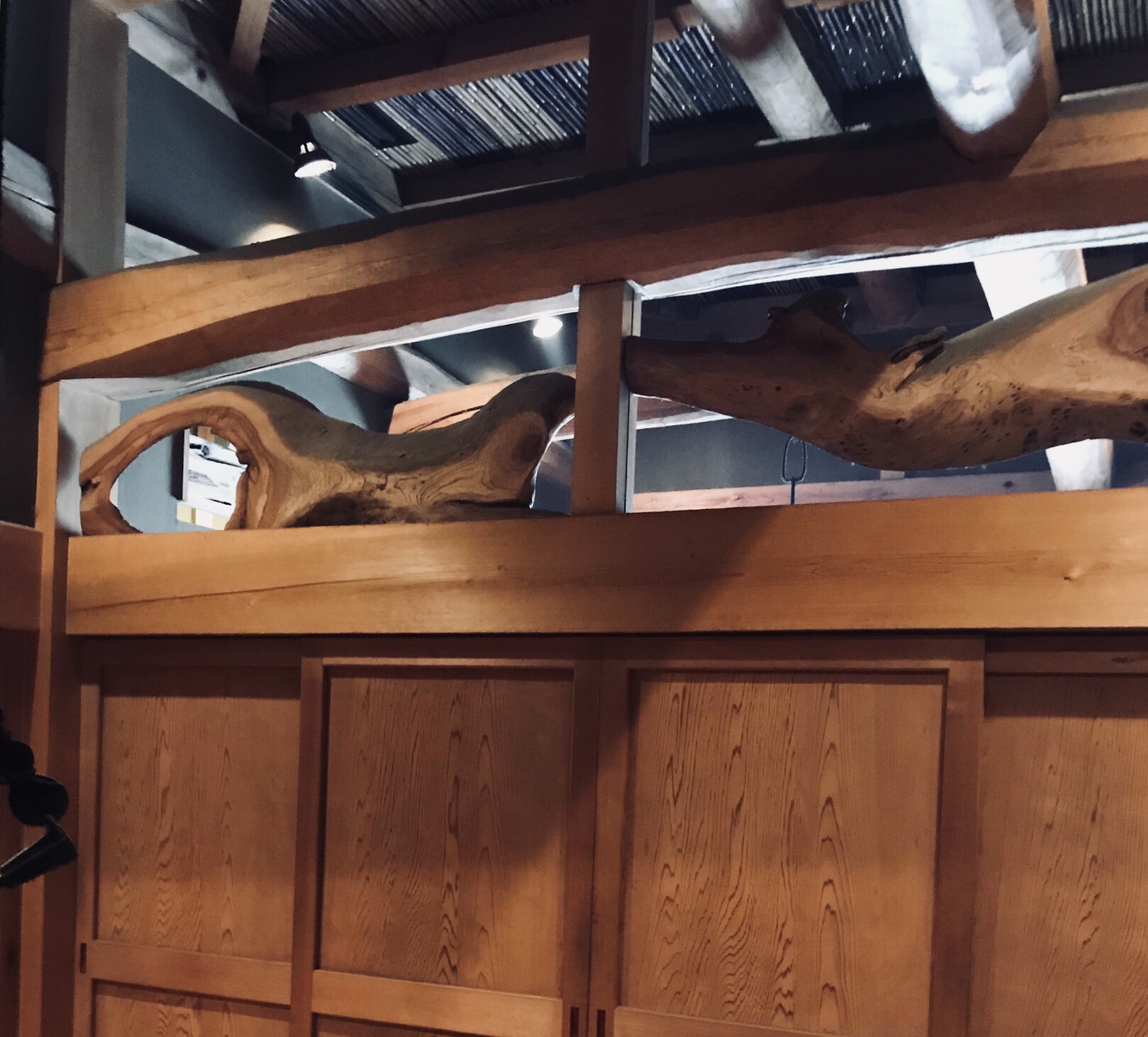 The room felt intimate while also being well-suited to my tight hamstrings, thanks to the horigatatsu seating with which your legs hang down into a partially recessed floor. The sunken rectangular irori, sandbox-like you could say, had wide wood borders to accommodate the food, and by the end of the meal they were covered with the detritus and disarray from the four of us feasting.

When we first entered, there was a neat pile of glowing charcoal. Yanagiya uses two kinds: One is kurozumi, a black charcoal made from  a kashi, or poplar tree while the white charcoal shiro-zumi is from a pressed ubamigashi tree, or an evergreen oak. The latter is a binchotan charcoal that creates a long-lasting fire, but both charcoals work to raise the temperature of the fire. Partially surrounding the pile of burning charcoal were the small ayu or sweetfish, the designated fish of Gifu Prefecture. They were caught that morning in the next town and placed on bamboo skewers so that they appear to be swimming. 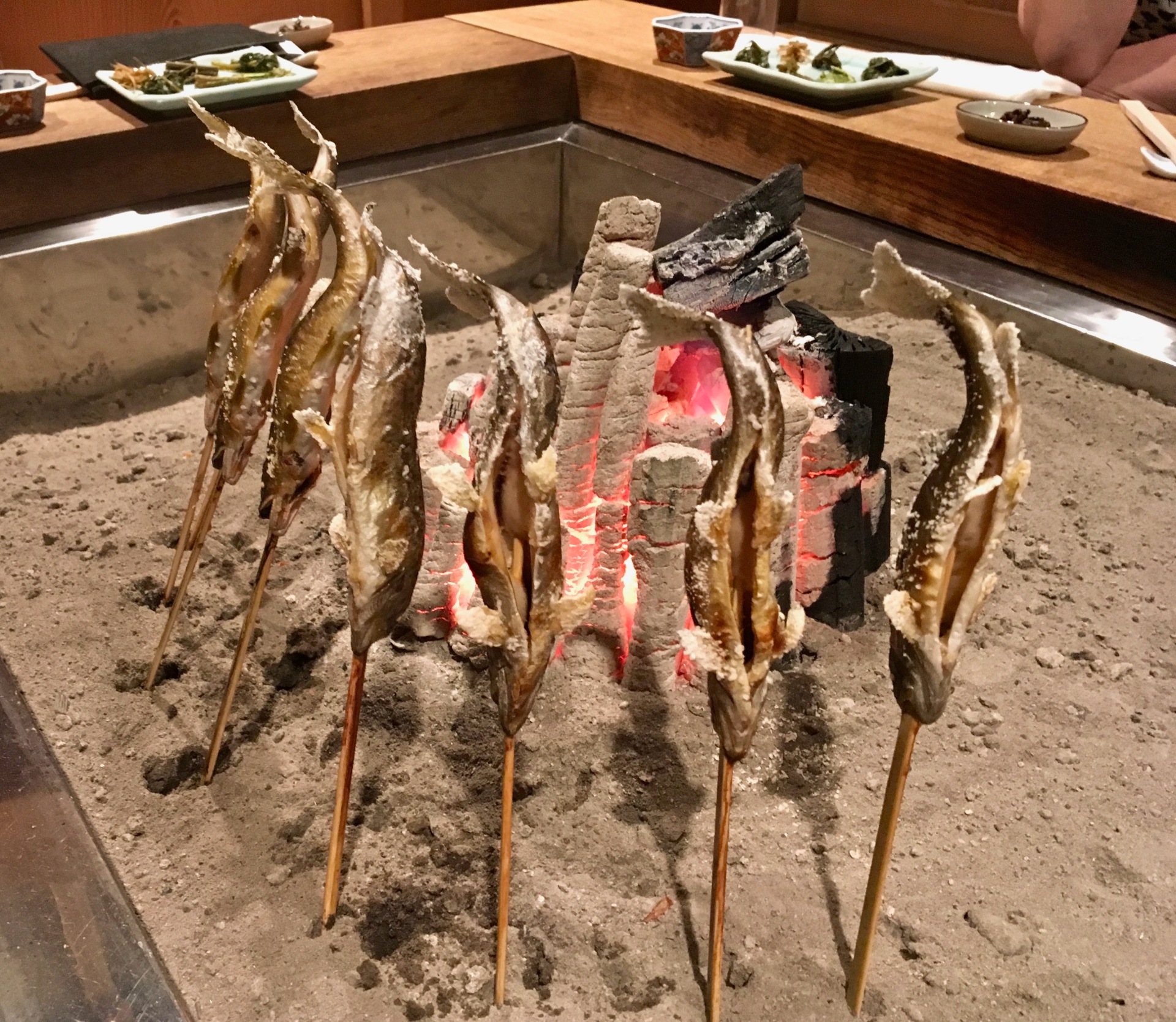 What drives Yanagiya’s cuisine is the same as in all great restaurants in Japan, most notably in kaiseki ones: the seasons, proximity of the produce and an obsession with freshness. These are the false rallying cries of so many restaurants of pretense where I come from, but here there is no monkeying around. Our venison from Hokkaido was the only product coming from beyond Gifu Prefecture. If one were to visit the restaurant in the fall, the offerings would be almost entirely different. As our visit was in the spring, the emphasis was on freshwater fish and mountain vegetables, the latter served boiled, as tempura prepared by Masashi’s brother, in a soup, and mixed with rice. 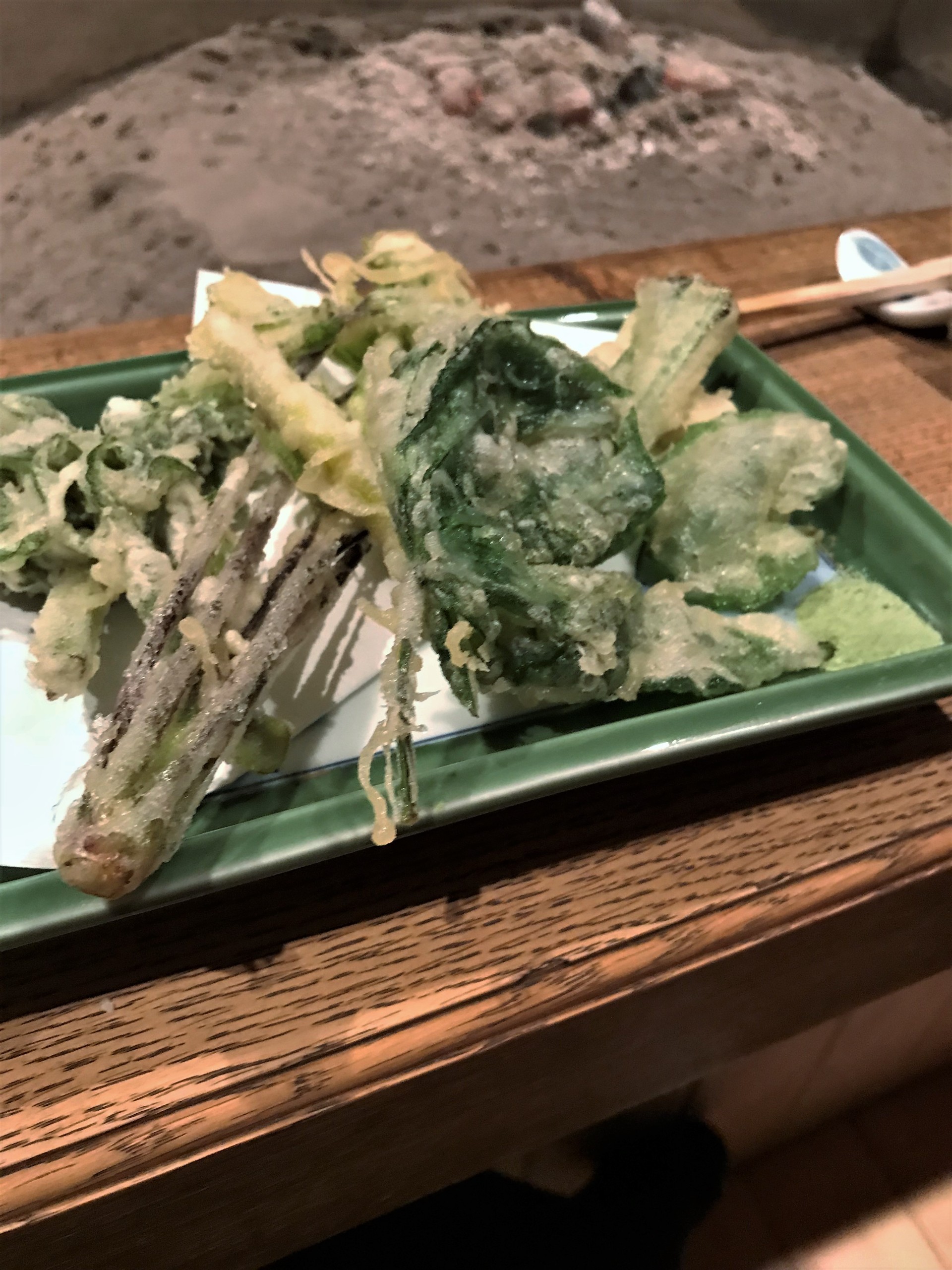 Amago, a red-spotted masu salmon was cooked in front of us and served lightly-tempured with the mountain vegetable rice.

Unagi, the wild river eel, came with a traditional soy sauce, the juices of which the chef added to a bowl of rice.

Meat in various guises takes front and center at Yanagiya. While fall and winter are prime time with duck, wild boar, bear, venison and game birds among the offerings, we nonetheless were treated in springtime to venison and an uncommon duck. Generally, duck takes pride of place because of the house soy and ginger sauce. The elixir is as old as the restaurant itself. Because the cooking pot is never emptied and cleaned out,  the endless sauce may be an early, if not the most early, manifestation of Molecular gastronomy since I figure that there must be molecules in the pot that have been there since the restaurant’s founding 72 years ago.

The duck is a bit of a story in itself. It comes from an uncommon breed, Falicated Teal or Yoshigamo in Japanese, and can only be hunted in April. Because it is also prized for its taste, the restaurant vacuum seals and then freezes it as to make it available past its hunting season.

I thought the situation with my venison dish would also be an out-of-season aberration, having read that deer hunting season in Hokkaido ends in February. With an a posteriori phone call, Yamada-san said that since Japan has a deer situation similar to what deer fence owners in the States have, the Japanese government, much to the chagrin of animal rights groups, has declared open season in those areas that are overpopulated with deer.

Here is an Eater.com video of restaurant owner-manager Masashi Yamada on serving game at his restaurant.

Stripping away the food itself, what you have is a repetoire somewhat akin to kaiseki, but without the structural precepts. The cuisine also doesn’t fall into the realm of other cooking with fire Japanese cuisines such as shabu-shabu, yakiniku, or yakitori, but overlaps with robatayaki which only rarely these days makes use of an irori. The number of dishes and the size of the portions correspond to kaiseki without that cuisine’s elements of classic, costly dinnerware and the beautiful arrangements of food on the plate, but with the variety and types of dishes such as sashimi, soup, mountain vegetables, grilled meat and fish,  rice dishes, and fruit for dessert, in our case a small piece of melon.

Yanagiya’s cuisine is rustic to the core and honest as can be. Unless you have an aversion to something offered, there are seemingly no low points or duds there. It’s not the “epater la bourgeoisie” cuisine that virtually monopolizes these rank-order “Best” lists or the convoluted concoctions you often find in Western cuisine. Here the food feels ageless, likely hardly different than when the restaurant began. A depth of flavor characterized nearly every dish, with delectable bee larvae cooked for six hours, the mountain vegetable soup, and the duck in the endless sauce being the most memorable for our group.

The cost for the omakase menu is around $125. which in Japan is relatively inexpensive for a restaurant so highly regarded. (The modest white Burgundy wines we had were fairly-priced as well). Other restaurants of renown cluster in the $250-300 range before drinks. This relative bargain accounts for the democratic composition of the clientele, much of it on a Sunday afternoon”en famille”. Yet not even the occasional wailing of a little lad from an adjoining room could put a dent into our memorable visit to Yanagiya.

Advocate for the restaurant patron.